Well, I’ve had a couple of incomings over the past month or so, but given that I spend my weekdays up in Newcastle right now I’ve not really had a chance to take any photographs of them until this weekend. in fact, I hadn’t unpacked my lights for the best part of a year as it’s such a palaver, but I decided it was worth the effort. So, to the first of them…

A Lange & Söhne was originally founded by Ferdinand Adolph Lange in Glashutte, Germany in 1845. However, the original ALS (along with the other Glashutte-based watch houses) was nationalised and ceased to exist in 1948, following the occupation by the Soviet Union after World War II. In fact, it wasn’t until 1990 that the current A. Lange & Söhne trademark was re-registered, when Lange Uhren GmbH was founded by Walter Lange, the great-grandson of Ferdinand Adolph Lange.

The number 1815 is a significant date in the history of ALS, as its the year Ferdinand was born in Dresden; now, the number represents a family of watches that pays a tribute to that legacy. The range consists of models with complications such as the chronograph, annual calendar, tourbillon, and perpetual calendar. However, the 1815’s all take their DNA from pocket watches (for which ALS was known prior to its nationalisation) by using traditional elements like railway minute track, Arabic numerals and club-shaped markers on the 15-minute intervals. The company has always had a history of innovation, and in fact a particular Patent – no. 9349 – was granted to ALS on 18 May 1879. The subject was a “device in pocket watches for recognising whether the watch is wound or unwound and for indicating how much time remains before it reaches the totally unwound state.” This was, in fact, the official moment that ALS’s characteristic UP/DOWN power-reserve indicator was born.

Looking at this watch (and in addition to the UP/DOWN power-reserve indicator) the blued hands, the recessed central segment, the Arabic numerals and the railway-track minute scale were all inspired by historic pocket watches. A top-mounted wheel train on the caseback side of the Calibre L051.2 movement and two additional screwed gold chatons are manifestations of the mainspring barrel that was enlarged with the 1815 and delivers power for three days. Also, because this is ALS, who have an obsessive attention to detail, the movement features a stop mechanism, which means that when the watch does eventually lose all of its stored energy, the seconds counter stops precisely at zero.

One thing that I didn’t know is that every ALS watch is effectively unique, because each movement that comes out of the manufacture with one component which is hand engraved; so, apart from the famous three quarter plates, gold chatons, and 245 individual parts, this one also features ALS’s individually hand-engraved balance cock. This tradition of engraving the balance-cock goes way back to the pocket watches. When ALS relaunched in the 90s they continued with this tradition, and because the engravings are done by half a dozen different craftsmen at the manufacture, each one looks different.

Anyway, the specification of the Calibre L051.2 movement…

Finally, then, to this particular special edition, limited to just 25 numbered watches in rose gold and another 25 in white gold. It marks 25 years since the reborn manufacture released the first of it’s watches back in 1994 and also celebrates the association with Wempe (another brand that was nationalised back in the day), who were tasked with selling them all through their own dealerships. As special/limited editions go… well, it really is special, and it really is limited! 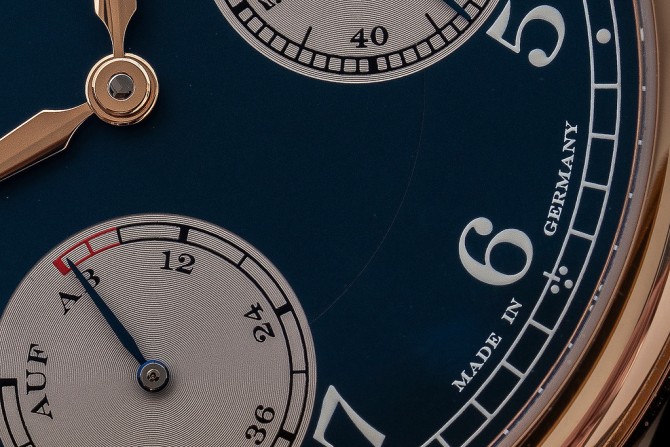