A while ago I allowed myself to trade the Fifty Fathoms Mil-Spec, a watch that I really liked a lot and missed immediately it was gone. In fact, it was my fourth Fifty Fathoms of one kind or another. I’d previously owned three of the 45mm models as well (the Automatique, the Dark Knight and the No Radiations) and whilst I thought the larger models were all absolutely gorgeous watches I knew they were a little too substantial for my wrists.

The Mil-Spec, being a whisker over 40mm, was perfect in every way but what they all had in common was a quality that became evident the moment you handled the watch. The flawless fit and finish, incredible depth of the dials & indices, the lumed sapphire bezels, the beautifully finished movements… in terms of divers, Blancpain take things to another level altogether, and – whilst clearly not cheap watches – at least you know you’re getting something more than a utilitarian movement housed in a relatively unremarkable piece of steel.

Anyway, back on track and the horological gods seem to have smiled on me (actually, it was planning rather than luck, and painful decisions were made). In any event, having missed out on one opportunity, I was surprised to see that not only was a second mint example of Blancpain’s latest tribute offering being listed for sale on my favourite watch forum. The result was probably always somewhat inevitable, and the Barakuda that’s on my wrist as I type is everything I hoped it would be. Certainly, it’s my favourite of all the Fifty Fathom’s I’ve owned, although there’s not a great deal to choose between it and the Mil-Spec. More on that in a minute, though.

The Barakuda is another beautifully executed tribute, this time to a watch that was originally released back in the late 1960s. Of course, the original FF dates back even further – to 1953 – and has a history that I’ve written about before so won’t repeat. However, whilst the French were the first to equip themselves with Fifty Fathoms models for their underwater missions other military elites followed. One of those – in the late 1960’s – was the German Navy then known as the Bundesmarine, which was supplied with Fifty Fathoms models via Barakuda – a German company specialising in the production and marketing of technical diving equipment.

Alongside the watches intended for the military, the company also introduced the domestic market to a civilian model adopting the Barakuda’s distinctive style, notably featuring the use of two-tone rectangular hour-markers, white-painted fluorescent hands, as well as a highly visible date display at 3 o’clock. Many were fitted with a Tropic-type rubber strap that was very popular with divers at the time and became quickly renowned for its durability as well as its wearer comfort. Production numbers aren’t verified, but it’s widely believed there were about 150 of these watches. This scarcity, along with the military provenance, have made the Barakuda a very prized watch among Fifty Fathoms collectors. In fact, many FF aficionados thought that it should have been the first limited edition tribute model that Blancpain produced. Here’s a shot of the original Barakuda, just as a point of reference; this one is from 1970 (and it’s a 41mm case, by the way). It was sold by Phillips at auction two years ago and fetched about £14k – not bad for one of the most iconic dive watches in history. 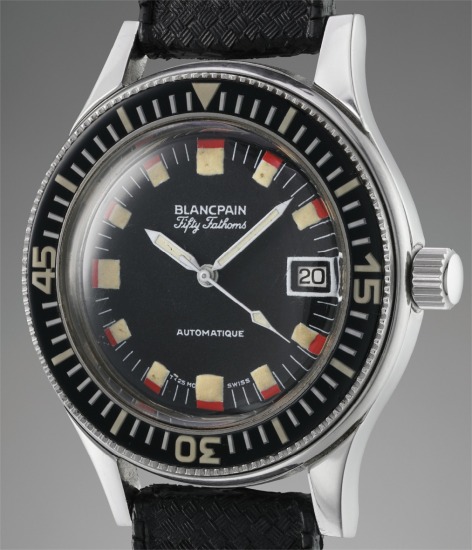 Let’s jump forward again, then, to Blancpain’s reissue of the Barakuda that was released last year; just 500 watches in all, it’s actually a pretty faithful tribute. The Barakuda shares much of the Mil-Spec DNA in that it’s presented in the same 40.3mm case and is driven by the same Blancpain calibre 1151 movement. In fact, the movement is made by Piguet but has been used extensively by Blancpain, and also by Brequet, AP and VC. Interestingly though, only Blancpain is allowed by Piguet to have a 100 hour reserve, whilst other rival manufactures have been forced to settle on a “measly” 70 hours; the nenefit of being siblings, of course. In any event, it’s finished absolutely beautifully with a mere 3.25mm thickness that belies its twin barrels, 210 components and 28 jewels. Whilst you might not realise it whilst gazing at it in wonder, the rotor is solid 18ct gold; however, it’s coated with a platinum alloy (Blancpain’s “NAC”) which I have to say looks amazing.

The dial is a matt black that somehow seems to add depth to the dual-coloured indices featuring the wonderful pops of red seen in the original. Both the crystal and bezel are domed sapphire, the latter being fully lumed albeit not going so far as to feature a minute track across its full radius as per the original. The lume, by the way, is spectacular.

I’ve been asked how it compares to the Mil-Spec, and the truth is that they wear very similarly in many ways for the reasons mentioned above. It boils down to aesthetics, and I’m sure that there will be fans in both camps. For me, the Barakuda’s warmth, matt dial and unique colouring, coin-edge bezel and date window positioned at 3 o’clock wins the day for me; however, you really couldn’t make a mistake with either, and to my mind both represent everything that’s right about reissues. Genuine testaments to the past, whilst representing the very best of watchmaking in the present.

So, the customary photos… not an easy one due to the domed crystal, but I hope that they convey in some way the beauty of this watch.

2 thoughts on “The lure of Blancpain”