Okay, I’m not going to ramble on this time (cue collective sigh of relief). However, if you fancy a bit of a read about the iconic Fifty Fathoms you could do worse than have a look here; I’ve had two previously, in fact, the other one being the DLC’d “Dark Knight”. I really have missed them both – I only sold them because I told myself they were a little too large for me – so when an opportunity arose to buy the limited edition (just 500 of this model released globally) Tribute to Fifty Fathoms I was quick to take the seller – a mate from TZ-UK – out for a beer or two, get him drunk and seal a deal.

The Blancpain ref. 5015B-1130-52A shares both case and movement with the standard Fifty Fathoms that I wrote about in the post linked above. Aside from the ‘No Radiations’ symbol on the dial, the differences relate to the bezel and dial configurations. The Tribute version features a bezel with almost an identical appearance to the original Fifty Fathoms “No Radiations” from the late 60s ; that is, a slightly different font for the numerals and a minute track that continues all the way around, as you’d find on a Milsub. The dial dispenses with all four of the arabic numbers, and also features round super-luminova markers instead of applied arrow-shaped markers, together with a date aperture at 3 o’clock with white date wheel (the standard FF has the date window at 4.30, and a black date wheel). Obviously, it’s horses for courses as to which you prefer, but I love this one – the changes to the dial work for me (especially the no-rads symbol) and the LE nature of it adds a little to the ownership experience.

Anyway, here’s a relatively quick and dirty photo, albeit that I lost my battle with the uber-reflective domed crystal (for now!!!). 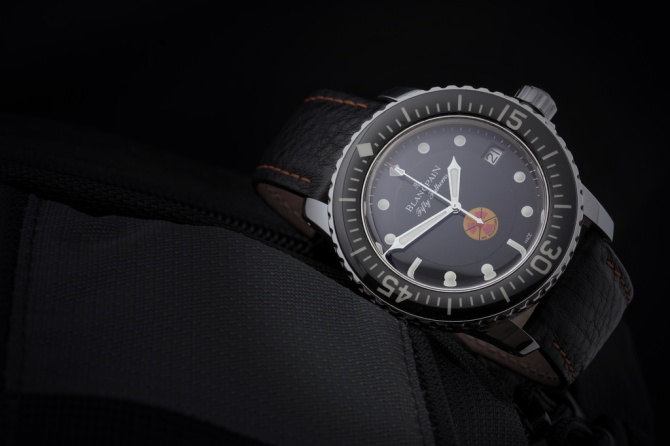 The other watch that joined the fold recently is one of the new Seiko Turtles – this is the SRP779K1 with the black dial and pepsi bezel. I actually bought it in Tenerife whilst I was buying Bea a really nice Certina chrono – the guy in the shop offered me a reasonable deal on the two, and I’d wanted to try one of these since they were released. I’m not going to say much more about it, save that these watches are a reissue of the wonderful 6306/6309 vintage Seiko divers from the 70s/80s. Now, after ruining the rubber strap that it came on, and subsequently buying the OEM bracelet from another mate on TZ, I thought I’d share a photo of the matching navy and red two-piece Zulu that arrived from Sweden a couple of days ago… as you can see, it’s a lovely match and serves to pretty up what is essentially a very utilitarian design. 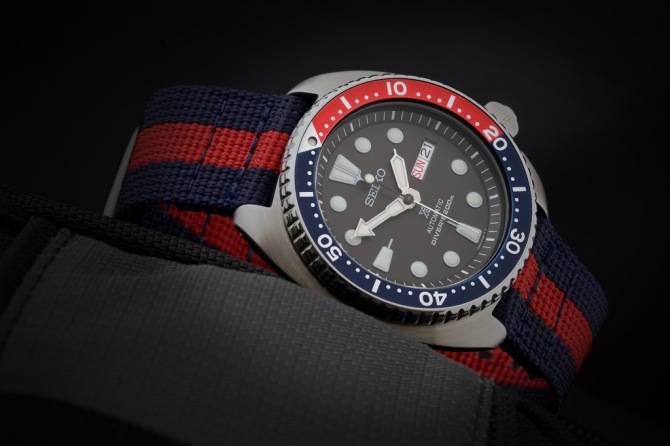